Prior to the centenary of Alan Turing in 2012 there had been several suggestions for a major public memorial in the UK, including placing a statue of Turing on the fourth plinth in Trafalgar Square. Nothing came of any of these, although the Turing Centenary Advisory Committee (TCAC), an international, non-governmental body, did fine work arranging conferences and other events around the world for the Alan Turing Year. Turing has meant a lot to me, over and above my career as an ICT lawyer. Andrew Hodges’s biography, “Alan Turing, the Enigma of Intelligence” 1983 had started many trains of thought – in particular, what does a society do with its geniuses? Turing’s post-war isolation and suicide, largely a result of his homosexuality but also, one suspects, because of his shy, awkward, bad-social-fit personality may account in part for the lack of appropriate governmental celebration of all this man’s work and legacy. So, I decided to do something myself. However, it can’t be said that this exercise was carried out in the white heat of rage: not at a rate of one centimetre a (good) day. Also, commencing in November 2011, it would have to be a lot smaller than, say, three metres square, and so whatever I did would be an anomaly as a “public statement tapestry”.
For this commemorative piece, the design was to be figurative and narrative, and intended to prompt questions as to what was meant by it. Many art works, including tapestries, commissioned by businesses or governments are anodyne, either decoratively abstract or displaying symbols that are quite obscure, while those that actually commit to being representational lack both the vigour and tension of mediaeval designs created by people who fully understood the discipline required by weft-faced woven textiles.
Back 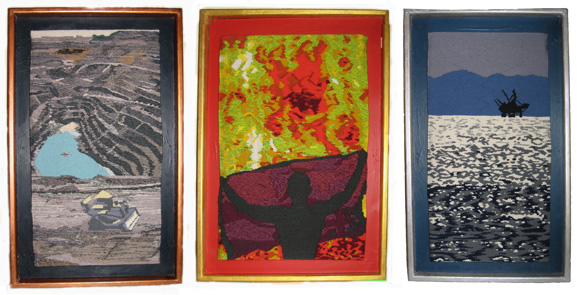